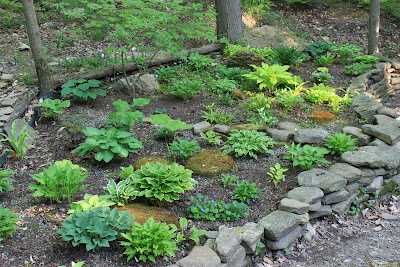 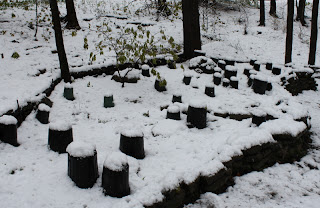 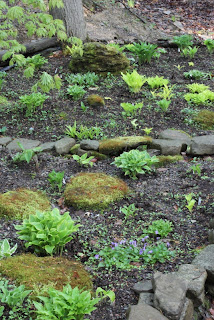 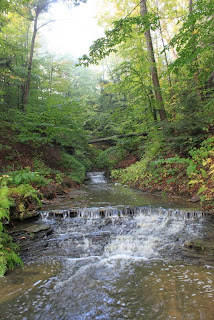 When Kathy and I found this amazing piece of property in 2002 the feature that really caught our eye was that there was a creek running right under the house.  It is not a very big creek, although when the snow melts or after a really heavy rain it can be pretty impressive, but the fact that it disappeared behind the house and re-emerged under the deck at the front was a little unusual to say the least.

If that were not enough the house was built (in 1974) exactly where the topography of the creek changes completely. 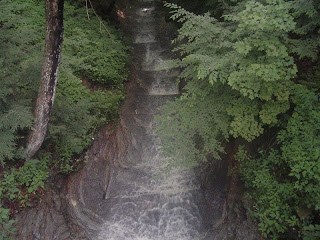 The view from the back of our house shows a wide, very shallow creek coming toward us forming a staircase of low waterfalls as it tumbles over a series of steps formed by the underlying shale rocks.  On both sides of the creek there are gentle wooded slopes inviting us to both wander and... later garden.

To the front of the house the creek emerges into a steep, sometimes narrow ravine and the water is restricted to a much more confined path as it plunges out of sight down the hillside.

Accessing the creek at the rear of the house is easy but to the front the steepness of the ravine make it almost impossible. Very early on Kathy and I agreed that we would only walk in the creek rarely so as not to hasten any erosion that nature might be steadily working upon.  Having said that, I have on occasions found Kathy ‘sweeping the creek’ and sometimes we need to remove fallen branches and accumulating leaves.

Luckily we are near the top of our hill and the drainage basin of the creek is fairly small. The overflow from a neighbor’s large pond and two roadside drainage ditches further up the hill are the three sources of our creek.  In summer, water is often just a trickle and algae can be a problem but for most of the year the water flow is just perfect. We can see the light dancing on the waterfalls and we can hear the tinkle of the water and passes through our gardens. A few times each year the flow is an exciting torrent that washes and cleans, sending everything towards an ocean somewhere.
The question we are asked most often by visitors is “Aren’t you worried that the house will wash away?” Well, for awhile we were, but then we realized that it had been here for thirty years and if it was to be swept down the hill it would have happened by now. 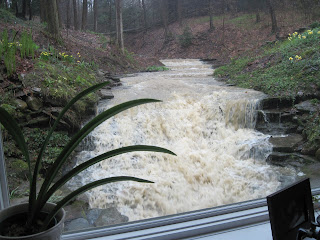 A year or so after we moved we were able to get our dear friend, Ran Lydell of Eagle Bay Gardens. to bring in his small backhoe and shape the gentle slope at the back of the house and to the right of the creek so that we could later terrace it. We also took down four of five of the larger beech trees to give us light.

I built stonewalls and we brought in topsoil and compost to mix with the underlying shale and clay. Kathy began to creatively plant and out gardens began to take shape. We were very content.

So content indeed that we began to privately call ourselves the Smugracks rather than the Shadracks. It was no huge step to refer to our little unnamed creek as Smug Creek and by osmosis the gardens we were building became .
﻿
Posted by Smug Creek Gardens at 5:29 AM